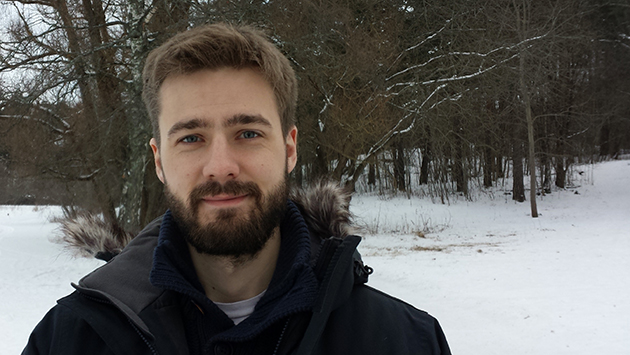 We are proud to say that that one of our many PhD-students, Frederic Wagner, has just received the "Best student paper award" for a presentation at the AGU-meeting last year.

AGU, short for the American Geopfysical Union, organizes the largest Earth and space science meeting in the world. This year there were almost 24 000 participants on site, one of them was Frederic Wagner, a PhD-student at the program of geophysics in the department of Earth Sciences. Frederic presented his research entitled " Migration Based Event Detection and Automatic P- and S -Phase Picking up Hengill , Southwest Iceland " and did it so well that he was honored with the "Best Student Paper Award".

- The project I am currently working on deals with the automation of seismic event detection, Frederic explaines.

-The detection of seismic events, mostly earthquakes (natural or induced), helps to understand tectonic and volcanic processes in the earth's subsurface and illuminate geological structures with the aid of seismic tomography. Continuous recording of massive amounts of seismic data calls for automated procedure to evaluate the data. My current work aims at evaluating the performance of a new method and enhancing it to detect seismic events and generate an event catalogue fully automatically, he says.

Currious about the paper? No worries, you can read the abstract here. Congratulations Frederic!