Geologists at Uppsala University have traced magma movement beneath Mt. Cameroon volcano, which will help monitoring for future volcanic eruptions. The results are published in Scientific Reports.

Mt. Cameroon is one of Africa’s largest and most dangerous volcanoes, and its eruptions pose a threat to nearly half a million inhabitants that live on and around its flanks. A team of researchers from Uppsala University set out to unravel the volcano’s underlying magma supply system in order to gather insight into the inner workings of the volcano and to help improve early warning and hazard mitigation strategies.

The researchers revealed a complex magma plumbing system beneath Mt. Cameroon volcano by analyzing crystals from the two most recent eruptions in 1999 and 2000.

‘We were able reconstruct deep-seated magma storage reservoirs at the bottom of the crust, as well as shallow magma pockets in the uppermost crust. These shallow pockets seem to migrate in times of volcanic quiescence and may play a crucial role in priming the volcano for eruption’, says Harri Geiger, PhD student at the Department of Earth Sciences, Uppsala University.

The results further suggest that between eruptions magma batches migrate to shallower depths where they evolve and increase their explosive potential. Hence a longer time between eruptions increases the likelihood of the next eruption being more explosive in style, similar to the Eyjafjallajökull eruption on Iceland in 2010. 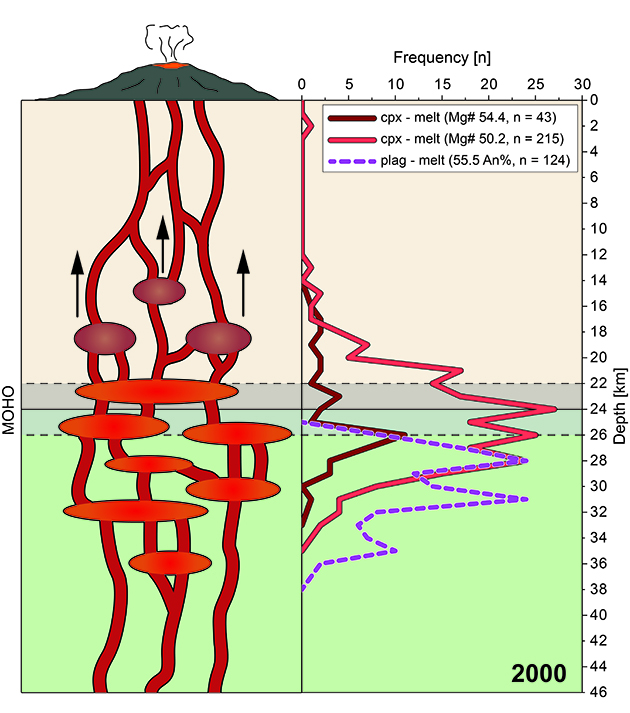 – The problem with volcano monitoring is that it is easy to look for signals, but it is hard to know which signals are meaningful! Our message to the volcano monitoring teams at Mt. Cameroon is that they should focus on the seismic signals of magma migration from about 20 km depth, as such signals are very likely to precede eruptions at Mt. Cameroon’, says Abigail Barker, researcher at the Department of Earth Sciences.

– The occurrence of shallow magma pockets likely plays a major role in controlling eruptive styles during eruptions and should therefore be routinely considered in hazard mitigation efforts. We believe these results have implications for other related volcanoes in Iceland, Cape Verde, the Canary Islands, and many other locations worldwide', says Harri Geiger.

Read more about the research.