Can the power of biota bring rocks to the front of climate solutions?

A European funded research consortium investigates whether a low-energy solution for carbon capture can be designed using an ooze of rocks, fungi, bacteria and earthworms.

Can we use the power of biology to increase the rate of silicate weathering to unmatched levels in a bio-reactor? That is the key question addressed in BAM! (Super-Bio-Accelerated Mineral weathering), a project funded by the European Innovation Council through the Pathfinder programme.

Why is this question so important? The answer is carbon capture. When silicates weather, CO2 is consumed: the CO2 is either bound in an aqueous or carbonate form.  Anthropogenically enhanced silicate weathering (ESW) therefore features as a potential ‘negative emission technology’. These technologies serve as crucial add-ons in the world’s mission to achieve a carbon neutral society by 2050. While achieving a strong reduction in actual CO2 emissions is the prime path to the climate change solution, an increasing number of studies show that it will also be necessary to actively remove CO2 from the atmosphere to keep global warming below 2°C. Several institutes worldwide have initiated field trials to spread silicate rocks (e.g. basalt, dunite, …), to investigate whether ESW offers
real potential to actively capture carbon in agricultural soils. Some promising early results have been achieved, yet currently remain small scale.

The BAM! project takes an entirely different angle to ESW. That is specifically what EIC Pathfinder projects are granted for: ideas that bring a totally new horizon and angle to past science. Project coordinator Sara Vicca (UAntwerpen, Global Change Ecology Centre): “The BAM! consortium, that consists of a multidisciplinary team of biologists, geologists, soil scientists, reactor engineers and AI-specialists, decided to ‘push the reset button’ for ESW, going back to the basics of weathering. We wanted to see whether we can artificially increase weathering rates to unprecedented levels at a reactor scale.

We want to transform ESW so that we can achieve carbon capture directly at CO2 emission sources, rather than in the natural environment. Our ambitious goal is to pave the way for a cheap and energy efficient technology to get rid of CO2 before it even enters the atmosphere”. To achieve this, BAM! focuses on the power of natural biota.
Soil-specialist Jan Willem van Groenigen (Wageningen University & Research, Soil Biology): “The intriguing aspect of BAM! is that it does not aim to speed up the weathering process by the most obvious candidate: temperature. Earlier efforts have been made there, but all proved to be very energy expensive, which is not ideal for a climate solution. The BAM!-team went back to the basics: in nature, weathering of silicates really speeded up when biota appeared. Plants, fungi, bacteria and earthworms: they can all have a stimulating effect on weathering.”

In the case of plants and fungi, this is because they are trying to harvest nutrients from the minerals, attacking the mineral surfaces chemically and physically, thereby increasing weathering. Earthworms are another story: their continuous soil processing (including microbial activity inside the earthworms) mixes the soil and increases its reactive surface. They are thus natural engineers that can keep weathering rates high, by promoting fresh availability of weathering surface. 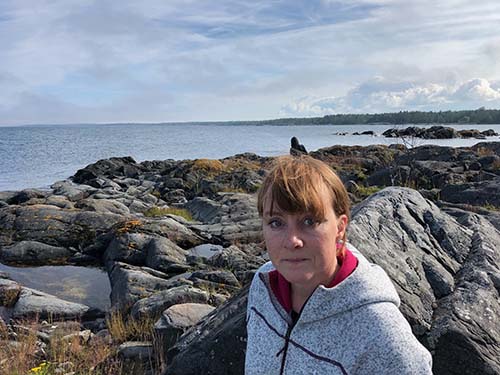 Anna Neubeck (The Department of Earth Sciences, Uppsala University), was immediately intrigued when she heard about the project: “The basic idea is as simple as it is innovative. We want to try and bring biota together in a reactor, that never meet each other in nature, to find out whether we can find combinations that show levels of weathering unseen in any other low-energy environment. Rather than increasing the weathering rates 10-fold, we aim for increases of 3-4 orders of magnitude, by uncovering synergies unknown to science. It’s truly science at its purest: uncovering uncharted territory”.

Jens Hartmann, geologist at UHamburg and long active in studying ESW agrees: “It’s a moonshot project. We just don’t know whether we can achieve such synergies, because nobody ever performed similar experiments. The theoretical potential is there however. That is why we combine multiple biota and perform a lot of experiments. We want to find the best horse to win the race. The number of analyses we perform is huge, covering weathering processes, health of the biota and mineral status. We want to make sure we learn a lot of new things while performing these unprecedented experiments.”

To make sure fast progress is made, the BAM! team includes not only earth-scientists, but also specialists in bio-reactor engineering and artificial intelligence.

Siegfried Vlaeminck (UAntwerpen, Bio-Engineering) is responsible for the reactor design. “It’s a challenge in many regards”, he emphasizes. “We need to keep multiple biota alive in a reactor, providing them with just enough food, CO2, water and oxygen, in order to achieve a maximal uptake of CO2. This brings biology to reactor design in a unique way: we do not focus on one species, like for example in an algal reactor. No, we need to optimize the environment in the reactor for a combination of biota, which is quite the challenge. And we need to make continuous analysis of the weathering processes possible. This is key to understanding how and when we attain maximal weathering rates, and how we can keep them going.”

For this advanced analysis, the BAM! team counts on the AI-scientists of imec, led by Tim Verdonck. “We want to connect an intelligent computer system to the reactor, that continuously analyses weathering rates and what is driving them. In the last stages of the project, this computer should be able to steer the processes itself, by e.g. adapting water flow and CO2-flow rates, or adapting the pH. It can thus automatically improve on new knowledge as soon as it is achieved. This is key to optimizing the weathering rates and potentially achieving the ambitious end-goals.” It is estimated that it will take another year before the reactor is completely up-and-running. But that was always the plan. While building the reactor, the team is now performing hundreds of ‘batch-experiments’, in which different combinations of minerals, biota, organic matter (as feedstock) and irrigation rates are tested. Sara Vicca: “We do not want to start the reactor experiments from scratch. By performing the batch experiments, we can already delineate which are the most promising combinations, and focus on improving them in the reactor experiments.”

Also here, the team of Tim Verdonck plays a crucial role. “The experimental combinations are chosen as such that we can achieve smart analysis of a maximum number of combinations of biota and minerals, and which are the most efficient CO2 champions. We perform multiple generations of batch experiments, where the design of the sequential experiments is directly fed by earlier results through intelligent experimental design. This machine learning is expected to effectively speed up the research process.”

Ivan Janssens, spokesperson of the UAntwerpen Global Change Ecology Centre: “BAM! fits within the European Green Deal strategy, that aims to transform the EU into a fair and prosperous society, with a modern, resource-efficient and competitive economy. We realize there is a large risk that we might not achieve our prime end-goal. But even if we fail, our research will deliver a plethora of novel insights into silicate weathering dynamics. Our results will for example also be interesting for potential CO2-neutral fertilizer development. Silicate fertilization has been used for millennia to increase soil nutrient and essential element availability, and we are optimizing the interaction with biota. To align with metal and steel industry, silicates can potentially be replaced with silicate steel slag waste from the industry
itself. The same holds true for added biomass, which could originate directly from e.g. the bio-energy sector.”

Preparatory experiments have also been carried out at Wageningen University & Research to assess the suitability of two earthworms’ species for a mineral environment and different food sources, temperatures and water flow rates. They found that both tested earthworms’ species were capable to survive in such an environment at higher temperatures compared to their comfort ones and with different water flow rates, showing a preference for straw as a food source. These results are very promising as they indicate that earthworms can survive in an artificial system and can tolerate physical conditions that are known for stimulating mineral weathering.

The results of BAM! can also directly come in to optimize the field experiments with ESW. In this regard, the potential synergies with e.g. the newly granted C-Farms project are noteworthy. C-Farms, also coordinated by the UAntwerpen Global Change Ecology Centre, is among the first projects to combine different agricultural CO2 uptake technologies at field scale, with direct involvement of different stakeholders, including farmers’ organisation, government agencies and steel industry. It focuses on circular sources of minerals for ESW (steel slags, concrete waste) and other soil-based negative emission technologies. Sara Vicca: “The BAM! results provide a kick-start for C-Farms, as we can start experimental design from the achieved knowledge. We can thus communicate on potential and challenges to stakeholders even before we start with the field trials.”