The search for rare metals is crucial for a green transition

You use them daily but perhaps you don´t think about them. The rare metals surrounding you in everyday life - in your cell phone, in your head phones, in the car, in wind power plants. Today we import the majority of these metals but many of them are present in the Scandinavian Nordic  bedrock. 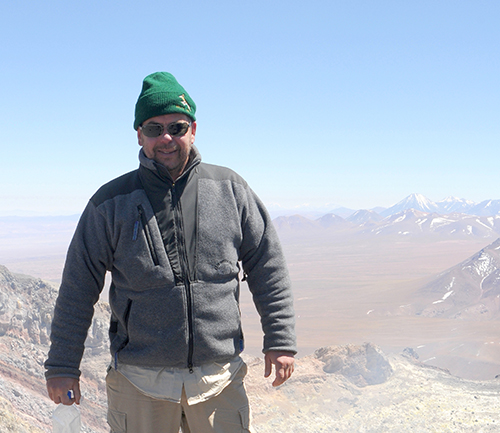 Erik Jonsson, Senior Geologist at the Geological Survey of Sweden (SGU) and Adjunct Professor in Mineralogy at the Department of Earth Sciences at Uppsala University, is one of the authors behind the report on critical raw materials. Erik thinks it is about time that we acknowledge the importance of these metals and minerals and the inherent risks associated with our extreme reliance on imports.

Why is it important to talk about critical raw materials?

- Critical metal mineralisations that are economic to mine are relatively scarce, but they are essential in order for industry and society to function. We use these metals every day in most modern high-tech applications, but these metals are also necessary for a wider green energy transition, as decided by our government. About ten years ago the EU released a first official list of critical metals and minerals and this last autumn the list was updated again. If we are to have electric vehicles or wind power plants, we need these metals. However, if we also consider that our overall other demands on them stays at the same level as today, or even increases, then we will need loads of kilos more of these critical metals.

It is deeply worrying that at the same time as we know about the extent of our needs, there is currently no over-arching plan or strategy for how we can secure access to these critical metals and minerals in the future, not even in the short term. Many of them are presently mined in countries that are not democratic or politically stable, such as China, Russia, Congo and South Africa, so what do we do if they cut their supply to us? The report is being written by geological and mineralogical experts and highlights the significance of rare these metals and minerals and their potential occurrence of exploitation in the Nordic countries. The report will be finished this summer and thence reafter presented to the Nordic Council and officially presented at a public meeting in September.

When did critical metals become a global issue?

- In 2009-2010 there were discussions about critical metals and minerals as a result of China cutting down their export of Rare Earth Elements (REE). Shortly thereafter the EU published their first list on critical metals and minerals in 2010. Now, 10-11 years later, this issue is finally discussed more broadly in the political arena. The latest update of the EU-list came this past autumn and now even lithium is included, which has surprised many geologists. Today there are several global producers of lithium that we rely on, the dominant being Australia and Chile. A smaller European part of the production comes from Portugal, but potential future resources are well distributed in Europe´s bedrock, for example in Finland, Austria, the Czech Republic, and Sweden.

What about recycling the critical metals?

- We definitely need to become better at recycling, but at present there is no basis for larger scale recycling of many critical metals. Aluminum cans are relatively easy to recycle, as they (obviously) contain mostly aluminum, but many other products are more complicated. Roughly speaking, you could say that around 75% of the periodic table can be found in a smart phone, and to separate and purify all these critical metals is complicated and expensive. Some people claim that we should recycle all of these metals but that is not realistic. Recycling alone will not give us the volumes of critical metals we need today and in the near future, especially if we want to steer society towards a green energy transition. In most consumer end-products, rare metals often appear in low levels and in complex compounds which makes them both difficult and expensive to retrieve. On the other hand, in those cases where it could work to recycle, we should become better at taking care of our metals.

What will happen if we don´t have access to these metals?

- Well, for example no European vehicle manufacturer will survive. I would guess that they could stay in business a couple of weeks, maybe a month, depending on which metal or special component containing them we are talking about, but after that the production would come to a halt. If they had a stock of material, they could manage for a short while, but look at what happened during the latest crisis regarding semiconductors, which has had disastrous consequences for Volvo and Scania. If for some reason Russia or South Africa cut down their production of platinum group metals the effect would be the same, or even worse for all producers of combustion engines and the products incorporating them. What we are talking about here is the economy, jobs, and complex industrial and geopolitical issues where the main issue is the ultimate source of the metals and minerals, the mines. We need to be realistic and start discussing what we want for the future and how we should act.

What is your own conclusion? How can we act?

- Sweden is one of Europe´s major mining nations and we should take advantage of that. Neither Sweden nor Europe can become totally self-sufficient in producing all of these metals and minerals, but still, there is no need for us to make ourselves vulnerable. Politically the responsibility for securing these resources should lie on a governmental or intergovernmental level, possibly with the EU as a coordinating actor. We should not believe that it would work to let private actors or the business sector take over the responsibility. It is not their role to secure the access; their role is to secure returns to their shareholders, not to secure our future industry and society.

We should also make sure we have supplies; just compare what happens when the health care sector doesn´t keep supplies to be used when needed. At present we must be prepared for what might happen politically in the USA, China, or Russia, My advice is; make it easier for mines to open and keep the mining industry alive. We speak out loud and wide about the clothing industry using unethical production methods, yet we gladly purchase metals from countries that that have no or poorly enforced environmental legislation and no consideration for working conditions. All this while we hinder new mining establishments in Sweden where we have all these factors in place. This is a double standard.

Read more about rare metals and minerals at SGU.

Here you find the EU list of critical raw materials.

Read more about our research in Mineralogi, petrology and tectonics.