Study of fractured rocks is important for a number of important applications, from nuclear waste investigations, to pollution control and remediation as well as various energy applications, including Enhanced Geothermal Energy. We have a long tradition in this research, from modeling to experimental characterization, with some key projects presented below.

In several research projects financed by Swedish Geological Survey (SGU) we have investigated the hydromechanical and chemical processes in the deep borehole COSC-1, in Åre with the objective to understand the fundamentals of flow and related processes in rock fractures. The objective has been to build an integrated geohydrological, geochemical and geohydromechanical model of the COSC-1. The presently ongoing project investigates the hydromechanical response of different types of rock sections (with no initial rock fractures, with initially flowing fractures and initially non-flowing fractures) when exposed to hydraulic stimulation. The work is carried out in collaboration with LBNL, USA, where a major field experiment was carried out in the COSC-1 borehole to measure the hydro-mechanical behavior of rock and fractures under high injection pressure in selected rock intervals and analysis and modeling of the experimental is going on results to estimate the changes in rock and fracture properties as a result of the injection/stimulation. 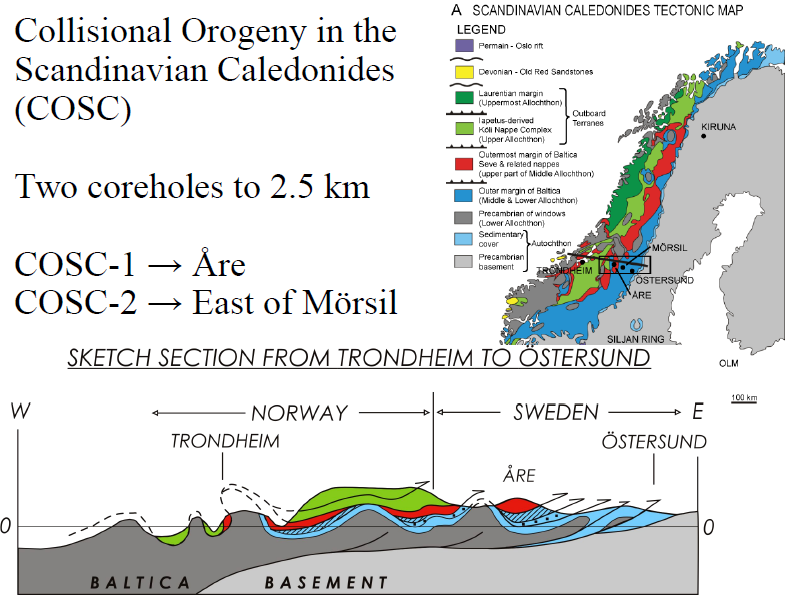 Financed by Swedish Nuclear Authority (SSM) we are investigating the effect of flow channeling and sparse fracture networks and how such influence the interpretation of hydraulic and tracer tests. It is commonly accepted that conceptual model uncertainty is high for flow and transport in deep crystalline rock, due to the inherent heterogeneity of the medium. In a single rock fracture, it has been shown that the heterogeneity in aperture and permeability leads to strongly channelized flow. Some field evidence points towards sparse networks of long channels as a suitable conceptual model to describe flow in good crystalline rock in the deep subsurface. The objectives of this project is to develop and apply the sparse channel network model to examine the effect of sparseness on field measurements such as transient pressure tests or tracer tests, calibrate the models with existing data and apply them to estimate the probability of channels intersecting tunnels/deposition holes and the impact of sparseness on long term predictions relevant for the safety assessment of deep waste repositories. An additional objective is to identify relevant sets of channel parameters, taking into account the disparity in stress regimes between the interior of the rock mass and the fracture mappings/measurements on outcrops and cores. 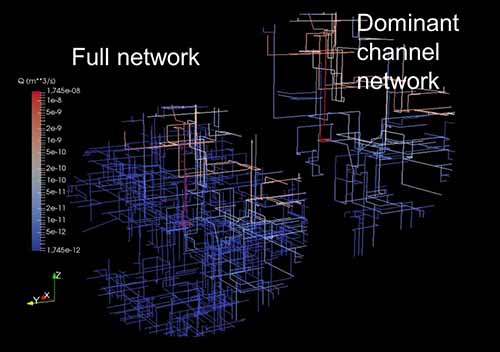 We are also addressing the effect of coupled hydro-mechanical processes in fractures and fracture networks in a number of different applications, from geological storage of CO2, to unconventional hydrocarbon recovery and Enhanced Geothermal Systems (EGS). For all of these applications it is common that fluid needs to be injected in a manner that does not cause unwanted pressure effects. Properly addressing this requires coupled modelling of the hydraulic flow processes and the mechanical processes. 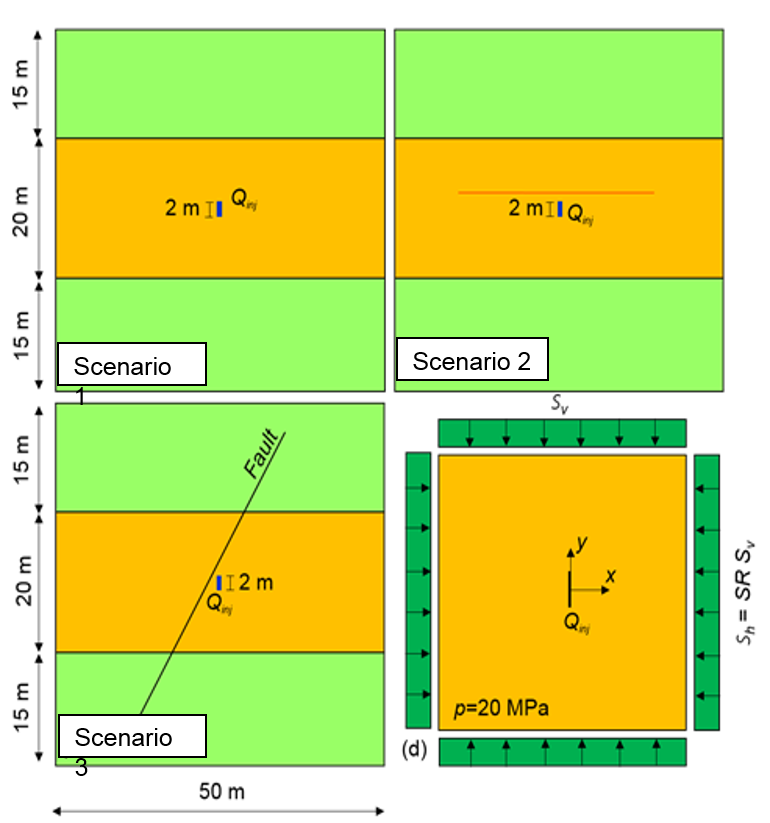 Two-phase flow in fractures occurs as a “competition” between the fluids for the pore or void space under the combined influence of capillary, gravitational, viscous, and inertial forces. The interplay of these forces is in turn influenced by the fluid and fracture properties. We perform carefully controlled experiments and develop mechanistic models to improve the understanding of the two-phase flow behavior in rock fractures. Fracture aperture topologies strongly control fluid-fluid displacement. The figure below shows drastically different drainage patterns for various combinations of the geostatistical parameters of the aperture field (more details can be found here and here). These patterns cast decisive influence on macro-scale flow properties such as relative permeabilities, residual trapping, and interphase mass transfer coefficient, which are needed in modeling two-phase flow and transport at the continuum scale. 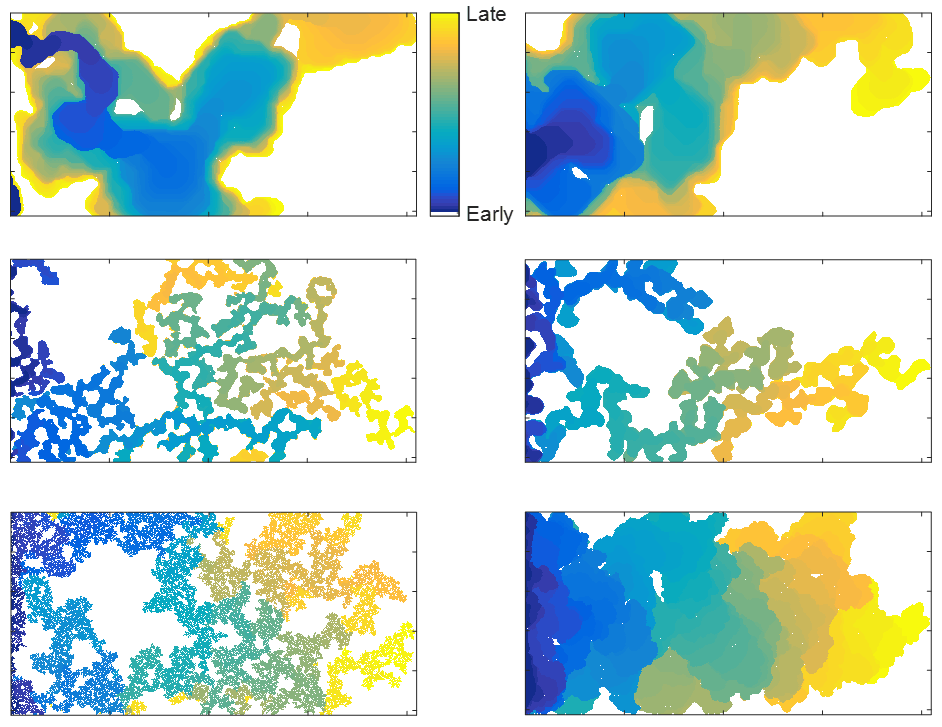 Groundwater contamination by dense non-aqueous phase liquids (DNAPLs) poses a significant environmental issue. Entrapment and dissolution behavior of DNAPLs in fractured media is complicated due to the heterogeneity at different scales, arising from aperture variability within individual fractures as well as from fracture connectivity in a network. Understanding the dissolution behavior of dense non-aqueous phase liquids (DNAPLs) in rock fractures is critical for remediation strategy design and risk assessment. We experimentally study the DNAPL trapping and dissolution in transparent analog fractures using light transmission techniques. We develop high-resolution numerical models to improve our fundamental understanding of the dissolution process. The figure below summarizes some of our experimental and simulation results. More details are given here and here. 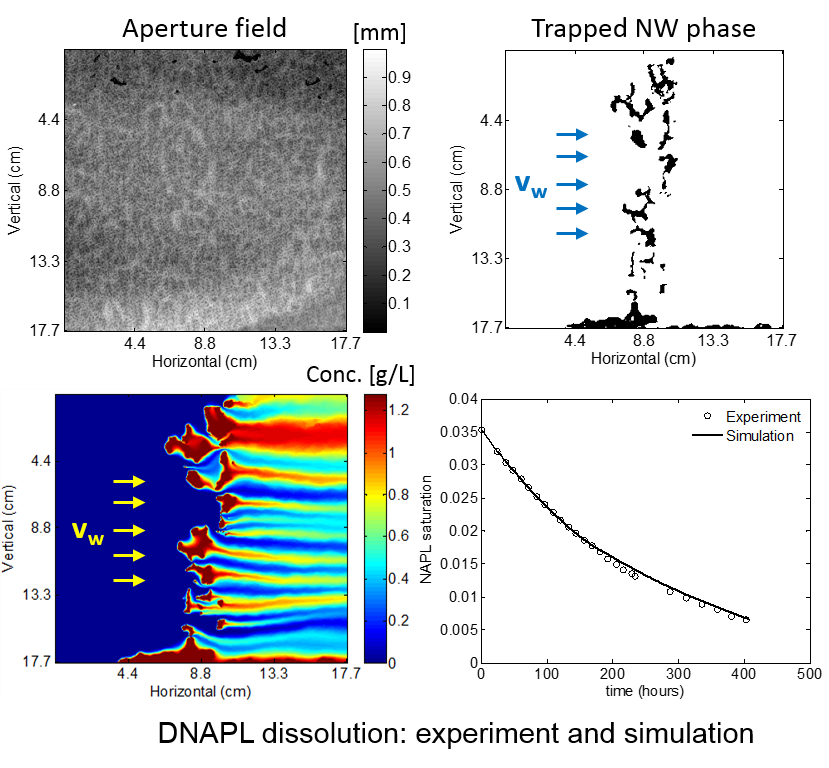