Kronebreen is a grounded tidewater glacier situated in northwest Svalbard, near Ny-Ålesund, and is one of the fastest-flowing glaciers in the archipelago. Recent observations have shown a sudden start of retreat pattern that makes it a fairly interesting study site in terms of glaciers contribution to sea level rise.

Kronebreen shares many features of the large Greenland outlet glaciers, a large number of which began flowing much more rapidly and retreating around in the late 1990s; in so doing, the total mass balance of the Greenland Ice Sheet has shifted strongly to the negative. Understanding the dynamics of tidewater outlet glaciers is therefore critical to our ability to predict the future contribution of ice masses to sea level rise.

Like the Greenland outlet glaciers, Kronebreen drains a large accumulation area via a narrow channel, in which sliding at the base is believed to play a key role in the glacier speed. It is believed that sliding is controlled by the hydrologic system and by sediment deformation, which are evolving in part with the climate. Seasonal evolution is therefore extremely important to the dynamics of the glacier.

To better understand the evolution of basal sliding through time, I use the inverse method to infer the spatially and temporally varying basal friction coefficient from surface ice-velocity observations. I am using the open-source finite-element model Elmer/ICE. The model geometry is fixed by digital elevation models of the surface and bedrock topography, and a time-series of 11-day average surface velocities determined from the TerraSAR-X satellite. I can then invert for a complete season and analyze the seasonal evolution of the basal friction coefficient.

A field campaign has been organized in April 2014 to obtain more ice thickness data (and especially in the tributary glaciers). Ice thickness is obtained using low-frequency (< 50 MHz) radar, either towed behind a snowmobile, or in the case of heavily crevassed areas, suspended beneath a helicopter. 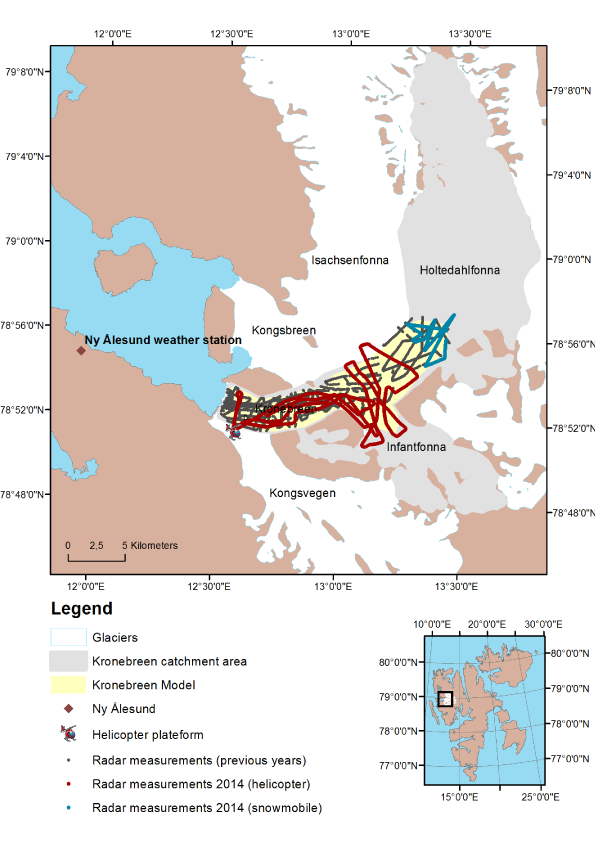 This project is part of D. Vallot’s PhD. It represents a collaboration between the University of Uppsala (UU) and other institutions. J. Kohler and the Norwegian Polar Institute (NPI) are responsible for the bed topography. The TerraSAR-X surface velocity data are obtained as part of a joint collaboration between D. Benn at the University Centre in Svalbard (UNIS) and A. Luckman at Swansea University. The project also includes Thomas Zwinger, from the CSC – IT Centre for science, in Helsinki, where the finite element software ELMER is developed.

In 2014, the field campaign for ice thickness data has been partly financed by the Arctic Field Grant (SSF).