Goal of the fieldwork

The break-off of ice-bergs from glaciers terminating in the ocean through calving processes is a major uncertainty in estimating their contribution to sea-level changes. This fieldwork aims at collecting field data of calving events (frequency and magnitude) on a calving glacier on Svalbard that will be used to validate a newly developed unique numerical model of calving glacier fronts. This fieldwork is a part of my PhD studies that involve modelling of the boundary conditions of polythermal tidewater glaciers in Svalbard (calving front and bed sliding).

Snapshot from a three-dimensional model simulation of Kronebreen calving front by the particle model.

Sea level rise is among the greatest threats due to climate change. Over the next century, ice sheets and glaciers will be one of the main contributors, primarily through calving of ice into the oceans. Calving fluxes are not easy to reproduce and due to their rapid and non-linear variability, they are usually difficult to include in models forced by evolving climatic variables. Instead, ‘average’ calving are parameterized but it is not able to reproduce observed calving rates. Pairing a discrete particle-based model with observations of calving events spanning 12 orders of magnitude in size indicates that calving belongs to a generic class of brittle fragmentation which is regulated, in its initial stage, by fast and unstable crack propagation. Initial crack propagation triggers calving “avalanches” that have mass and inter-event waiting-time distributions with a striking resemblance to the Abelian sandpile model. This suggests that calving termini are self-organized critical systems like earthquakes.

This is the first time such a particle-model is compared with real calving data and linked to a mathematical theory. This promises to be an important turning point in calving process understanding. Tunabreen is part of the observed glaciers.
This project is only starting since more data are needed to calibrate the particle-based model and allow calving parameterization. A step forward is to couple this model to a continuum ice flow model in order to include the calving process to ice flow modelling and improve prognostic simulations of glaciers.

In this project I collect data on frequency and magnitude of calving events of Tunabreen, Svalbard, using a time-lapse camera. The data is used to compare with the output of the discrete particle model to validate it. 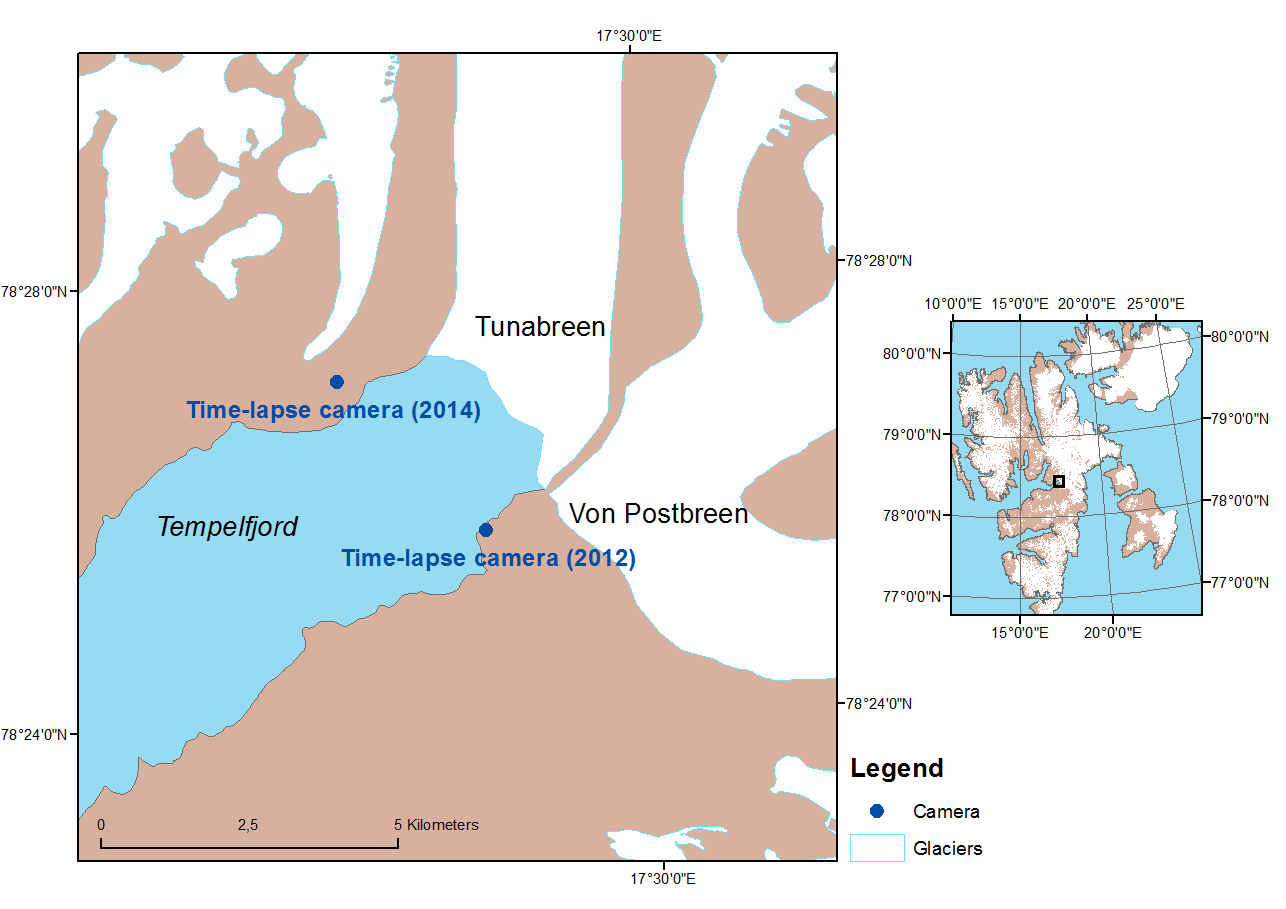 Left: Map of Tempelfjord and Tunabreen with the time-lapse cameras locations. Right: Map of Spitsbergen with a black square showing the study area.

A time-lapse camera is already set-up in front of Tunabreen, Svalbard since April 2014 to monitor the size of calving events. Some data are already available and will serve as a starting point to assess the calving size distribution. To calculate the size of the detached iceberg, an image analysis is necessary to automatically detect when a calving event is occurring. 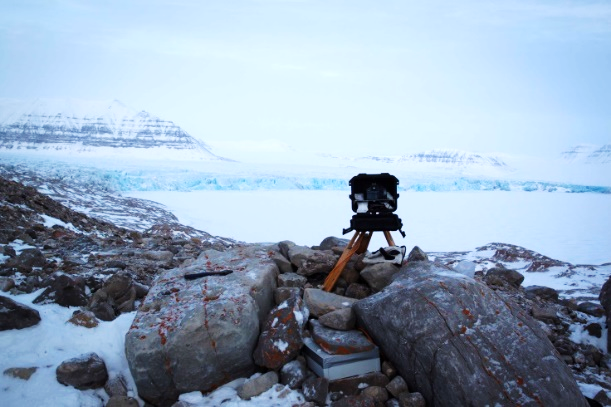 This project is a fruitful collaboration between different disciplines (physics, image analysis, field-work and remote sensing) that is already going on. between the University of Uppsala (D. Vallot), the CSC – IT centre for science (J. Åström for the particle model and T. Zwinger for the ice flow model Elmer/ICE), the University Centre in Svalbard (D. Benn) and Swansea University (A. Luckman).

In 2014, Ymer-80 and SSAG participated to support this fieldwork.